Some years ago, I facilitated an integration workshop in a multi team development project. Teams had been working for too long in isolation, and while everybody thought their modules were nice and shiny, none of us knew how they would fit together. So we decided to sit down with representatives from each team and integrate so that a simple use case encompassing all modules came through. There were some questions before we started whether the ambitions of the workshop were to low, as the use case we wanted to address was really simple. But we decided to keep scope low, to get an easy start.

The result of two days work was devastating. Nothing worked. For a long time, progress stopped because our servers simply weren’t able to ping each other. During the two days we constantly had to lower expectations, and we were getting increasingly worried about the presentation to management scheduled at the end of the workshop. The whole project was already behind, and now we were going to top the situation by exposing ourselves as incompetent. What could we possibly gain from this foolish initiative?

I recently ran another type of workshop aimed at experimenting with customers and the use of news letters. Our assumption being customers would buy more of the offered services if news letters were cleaner and promoted one particular item. As with the integration workshop, we formed a group of people who usually didn’t work closely together, set a short term goal and went for it. Our results were inconclusive. We didn’t get enough data to confidently conclude on anything, hence our hypothesis (and goal of the workshop) remained to be verified.

So what were the points of these workshops? Assembling cross-functional inter-team groups that collectively fail? Waste time discussing things that only a few of us normally care about? Create a feeling of incompetence?

We could easily write off such initiatives as time wasters. Especially if using traditional ways to see progress. We hadn’t delivered any “story points”, so how could this possibly be anything but wasteful?

Contrary to the first impression, I think both workshops were successful, because they gave us something no back-log can provide. They gave us Focus.

In his book Running Lean, Ash Maurya writes about the relationship between focus, learning and speed: 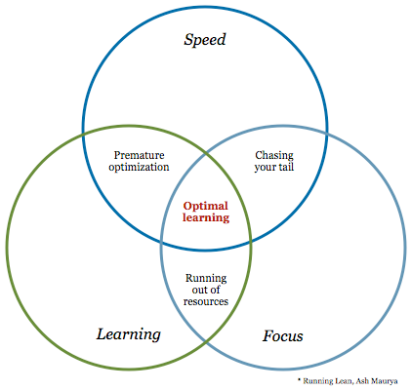 Summarized, he says that learning and working fast can create dangerous side effects if the necessary focus isn’t present. Hence, focus becomes an important factor in an effective innovation process. The only problem is, how do we define focus? How do we achieve focus? The full answer is probably impossible to give. Nevertheless, these workshops have in my experience proven to be useful tools to get in the right direction.

In both workshops, I noticed a few situations that in retrospect to me have become the highlights of those hours we spent together: The discussions that started when things didn’t progress as planned.

At that time everybody seemed to forget their normal area of work, and instead started focusing on the entire system or product. At that time, it was the combined expertise of the group that made the difference, and not each and everyone’s personal opinion. At that time we became truly cross functional.

Hence, my most important lesson learned from running such workshops, was to look for the real benefits of the workshops not in how close we were to target our goal, but rather from the amount of focused energy the workshop was able to stimulate, also after the workshop had concluded.