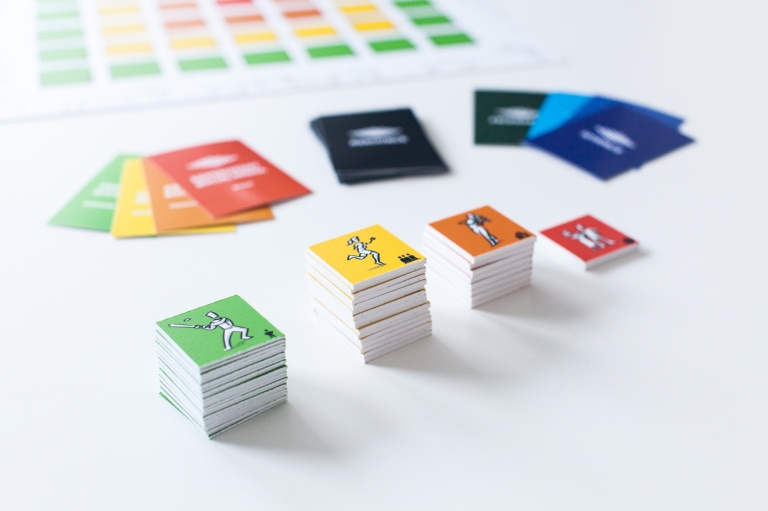 Before Playing Lean I didn’t have any experience with making, producing and selling a physical product. Creating a board game about the Lean Startup, I had to ask myself: Can a board game be a Lean Startup? Will the lessons I try to teach my software-making clients still apply?

When I’m writing this, our second Kickstarter campaign is in progress. It was funded in just 10 hours. This stands in contrast to the first one that ended at 24% and failed. A lot has been learned. I need to write this now to remind myself of that. Afterwards, I may start telling myself that this was a straight line from plan to success.

Here are the three lessons that stand out most clearly right now.

For the first campaign, we weren’t ready. I closed my eyes and pushed the launch button on Kickstarter. Why? Because 100 people had gathered for the launch party. Playing Lean’s co-creator, Tore Rasmussen, had landed in Texas, and was getting ready for the big tour of America.

Maybe we would get lucky? Maybe the world would pick up on our great idea and make sure it was funded?

That didn’t happen, of course. We had launched way too soon. First of all, product development was not even close to being done. Not only in the sense that a product should continue to evolve for ever, but in the sense that it wasn’t really playable. Pieces were missing, components were not ready to be printed.

We had to spend the weeks both before and after launch on the product. This forced us to neglect most of the marketing we knew was needed. Not a good situation. All of this happened because we had set a launch date too soon  – with expensive external commitments.

Don’t use the launch as your motivational stretch goal. It may kill your product.

After another evening of play testing the game, we had an epiphany, an idea for a major improvement of the game. It was just one of those moments. I ran home and wrote down my suggestions, and prepared to test them the next day. Then came the setback: I was told I couldn’t test them for a long while. Our designer had to make a new look for the cards, then copy and paste all the text into Illustrator. Then we would need to make an appointment with the print shop. Days of work.

At first, I tried to settle with it. What’s a few extra days anyway? Then I remembered what I would have told my customers: Don’t accept the excuses. Find other ways to keep your iterations short. To make the new idea work we would need rapid iterations, but it didn’t need to be pretty. I set up my own playing cards production line with Numbers, Pages and a merging tool. Add to it glue, colored paper and scissors and we could make a new set of cards in hours instead of days!

Tore had turned on some Twitter Ads over the weekend. A few backers were coming in, but could we attribute them to the ads? It turned out that we hadn’t done our homework. We had some information from Kickstarter itself, but it would only say that the source was Twitter. Not whether it was paid or organic. We had bit.ly-link which gives a little analytics, but not nearly enough.

Then there was Google Analytics, but we hadn’t put on any URL parameters to identify the campaign. We did that, but then we hadn’t set up a conversion goal in Google Analytics. As it turns out, these goals can’t be retroactive. We will never know if the Twitter ad was effective.

Think hard about what you want to measure and how. This will let you strengthen what works and shut down what doesn’t.

Sure, these lessons aren’t the grandest of insights, but maybe they’re part of that smaller pool of knowledge; the basics that are so easy to forget yet so essential to your product.