You’d be surprised how much The Martian and Einstein have in common. Except from the fate of Einstein’s brain, which was stolen from his body after he died (it’s a bit macabre, I know). Still preserved, the brain surfaced decades later in a hospital lab, and a brain specialist was asked to analyse it, not knowing who it had belonged to. He was able to deduct two things about the person: 1. He had played the violin. 2. He had an extraordinary capacity for processing terrain and other three-dimensional space. Both turned out to be true: Einstein did play the violin, and his theory of relativity is largely based on multi-dimensional thinking.

Brain plasticity is fascinating. Our brain physically changes based on what we do. Einstein played the violin to relax, and it helped him solve fundamental puzzles of physics. It sounds impressive, but instead of seeing it as two distinct accomplishments (how could he have time to learn the violin?), you should see it as synergy between seemingly disparate activities.

An astronaut doesn’t tell Houston “you have problem”:

In flight, every problem is the astronaut’s problem. Moreover, time and resources are scarce. He has to fix problems himself, regardless of expertise, personal preferences or identity. The parallel to entrepreneurs is striking. 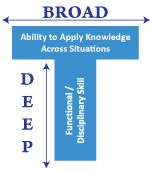 The T-shaped competency profile came in fashion with cross-functional teams. The T indicates that, while you have one deep expertise (typically programming, design, marketing, sales, operations and so on), you also need to expand horizontally, and learn from other experts. However, you still get to program, design or do marketing as long as you are able to collaborate effectively with every other function on your team. You still get to defer tasks outside your area of expertise to the appropriate team members. You still get to identify yourself with other experts in your field.

Sounds good, right? In the world of entrepreneurship, it’s not enough.

First of all, an entrepreneur doesn’t get to be programmer, designer or business modeller full time. Work is to unpredictable, plans are to short-lived, the need for improvisation is too high.

Secondly, an entrepreneur can’t keep himself from doing what is needed, simply because he doesn’t have the skills. When they’re not available, everyone on the team will have to acquire the skills their product needs continuously. You can stop neither yourself nor others on the team from doing what it takes for everyone to survive, even if the solution, seen in isolation from the big picture, would be inferior to the works of a specialist.

Third, the identity of who you are as a specialist will get in our way. You’re not a trained professional any longer. You can’t afford to be driven by recognition of your peers, or by higher achievements within your domain of knowledge. Those drivers must be replaced, or even consumed by the driver to build a great product; your mission to innovate needs your full attention.

Take Mark Zuckerberg: He has obviously acquired deep skills in many areas beyond programming over the last 10 years. From hacker to founder to growth hacker to CEO of the world’s largest media company. Similarly, astronauts are not specialists in flying and operating space ships alone. They also study biology, so that they can get that extra-terrestrial lab going. They do space walks, fix and maintain advanced equipment and even take amazing photographs of the earth seen from space. Entrepreneurs should aspire to an astronaut’s state of extreme mastery: You need multiple deep skills, and you need that “do whatever it takes to move forward” attitude. No vanity. No hesitation. Just focus and action.

Here’s what we believe to be areas of deep skills for entrepreneurs. You will most likely need to develop your self in several of these areas, if not every single one of them:

The optional extra: Develop yourself as an artist. It’s not about showing off your intellect (but feel free, if you want to). From painting and singing to climbing and martial arts, masters of art develop themselves personally, in detached exploration of skills and expression, and are later able to take advantage of the resulting versatility in their practical work.

It doesn’t matter that you’re a programmer. Today, you’re learning how to grow potatoes

The book The Martian is about an astronaut left behind on Mars after being presumed dead. His goal is as obvious as it impossible to achieve: Get back to earth. He has to mobilise everything he has, mentally and physically, to survive and get the help he needs. (As the slogan of the Hollywood adaptation says: “Help is only 140 million miles away”.)

The Martian is not a science fiction book. Rather, it’s a business novel about entrepreneurship. Faced with impossible tasks, facing imminent death in a beyond hostile environment, the Martian survives because he builds on a simple mindset, with two distinct features:

As Ash Maurya starts his lessons learned from more than 10 years as an entrepreneur: “At any given point in time, there are only a few key actions that matter. Focus on those and ignore the rest”.

If you want to become an entrepreneur, look at the astronauts, and look at what great entrepreneurs have done before you. You might be surprised to see how they focused, both in face of  trouble and opportunity, and how they challenged established views on what focus and skills really are about.

So pick up the violin, and start rehearsing. When future success is 140 million miles away, your own diversity and profoundness are the two single most important assets in your possession.

By Kim Leskovsky and Anders Haugeto (@hauge2). Also thanks to Viktor Varland for valuable feedback.